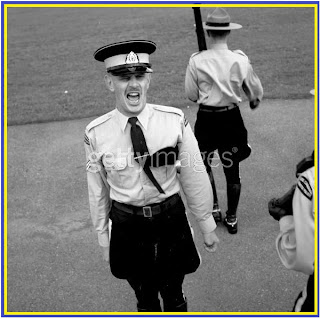 In yonder days, one did not know the first name of the Corps Sergeant Major (CSM).  He went by 'Sir'. It was always 'Sir'. Simply one word, 'Sir'.

But, suppose one did know his name, one was very wise never to use it -- it might be traced back to the offender. In foregone days, one was better off not to know the CSM's first name. It was treated much like a corporate leak.

RCMP recruits at 'N' Division and 'Depot' Division presumed that CSM's were born without the fuss of a first name. It was generally accepted that some mothers could predict the future career of their baby sons, that is the RCMP -- one new, proud mother was overheard to say, 'I had a 'Sir'. Even at childbirth, the word 'Sir' would cause everyone to stand as rigid as a parcel of pacing sticks. In delivery rooms across Canada, doctors and nurses wasted alot of time. Frozen, as it were.

CSM Gilbey is spoken about fondly to this day. It seems that anyone with a Regimental Number from about Reg.#2 through to Reg.#25000 knew or wanted to know CSM Gilbey. In biblical terms, it could be said that CSM Gilbey was heard before he was seen.

In fact, some Vets claim that CSM Gilbey's voice was so strong that parliamentarians 'on the Hill' would conduct their business in quiet tones while CSM Gilbey was on the Parade Square. Horses housed in the stables at 'N' Div lost weight when his presence was about. He would cause flies to use alternative flight paths. Even the wind obeyed him.

CSM Gilbey retired from the Force in 1975. Today, he lives in Ottawa. He is active with all Vet activities and enjoys golfing all summer with friends. He is an avid historian about matters connected to the RCMP and he insists on history about the Force being told as correctly as possible.

Over the years, CSM Gilbey has been a firm and steady friend to many of us. I don't allow myself to think of his first name. To me, it's just 'Sir'.