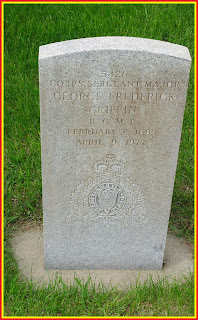 This interesting inquiry of an international sort about CSM Griffin was received today.

I was delighted to discover your website because I'm trying to trace my family history. My parents once told me that a G. F. Griffin was connected to the family in some way and that his name appears as an advisor to the film Northwest Mounted Police. He was known to my parents and grandparents as 'Uncle Tim'.

I note from your records that he was born at sea near Liverpool, England. Liverpool is the city in England where my deceased parents and Grandparents lived.

To see a photograph of his grave stone is really heart warming. I would be really grateful if you were able to put me in touch with somebody who may have more information about Uncle Tim.'

*A note of reply has been sent to Mr. Lawrenson