He is survived by his wife, Joan, five children, fifteen grandchildren and a great grandson.
Dick's life was richly blessed.

I was notified this afternoon of Bill's passing by his son Doug.

At this time, funeral arrangements have not been made, but I will send out a message as soon as I know something new. The thoughts and prayers of the Regina Veterans Association go out to Doug and all the Pomfret Family.


Born on October 4, 1939 in Worthing, England, John moved to Canada as a teenager. He proudly joined the RCMP and served for 27 years beginning in the prairies during the 'wild' days of justice, then in Ottawa, then finally in Vancouver, BC.

John retired from the RCMP in 1987 and spent another 10 years serving in the the federal government.

John moved his family to Ladner in 1974 and has thoroughly enjoyed all that the west coast has to offer. He instilled in his kids a love of nature, water, and buying secondhand.

John was a magnet to good people, always surrounded by great friends.a His interests widely varied from birds to binoculars to boats to garage sales. John had an uncanny ability to fix anything and passed this down to his kids. He and Kay also took many trips in their camper and loved to go sea kayaking together. John always felt great satisfaction in sharing his love of the outdoors with the ones he loved.

At this time, funeral arrangements have not been completed and you will be advised as soon as we receive further information.

Gerry was a Life Member of the RCMP Veterans Association.

J. O. Gorman was the son of the late Margaret Murphy and the late John Gorman. He was the husband of the late Denise Menard and the father of Mark and of Lucy Gorman (Brian McCoy). He was the beloved grandfather of Benjamin (Katie Caron), Martin and Evan McCoy.  The family wishes to thank all of those who provided him with excellent care over these last months.

Family and friends may visit the Kelly Funeral Home, 1255 Walkley Rd (east of Bank) on Thursday, August 25 from 2 to 4 p.m. and from 7 to 9 p.m. Funeral service will be held at Resurrection of Our Lord Parish, 1940 Saunderson Drive.

In Memoriam, donations to the Alzheimer Society of Ottawa would be most appreciated.

Posted by BuffaloJoe at 6:16 AM No comments: 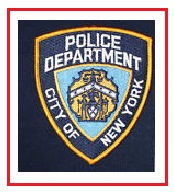 It's time this Blog had a rest,

An entry each day is a mighty test,

So, before my wife returns to teach,

We're off to rest on a Brooklyn beach.

Our trip is a secret. Not a single, single clue will be left behind with regards to our destination.  The Buffalo Blog will return.

I am very appreciative to every person; Vets, Members, Friends and Family who sent me information and photos over the past year.  I thank you with all my friendship and affection.

Enjoy your summer too! 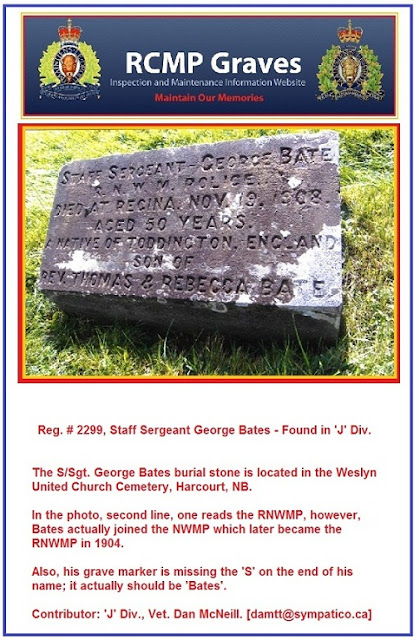 Links to this post
Labels: In Memory of Reg.#2299, S/Sgt. George Bates 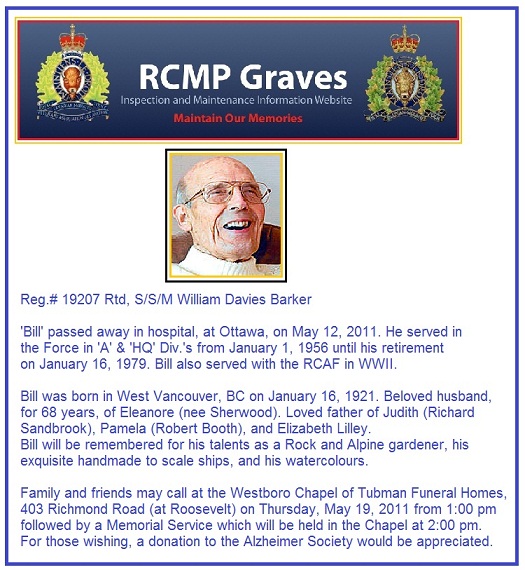 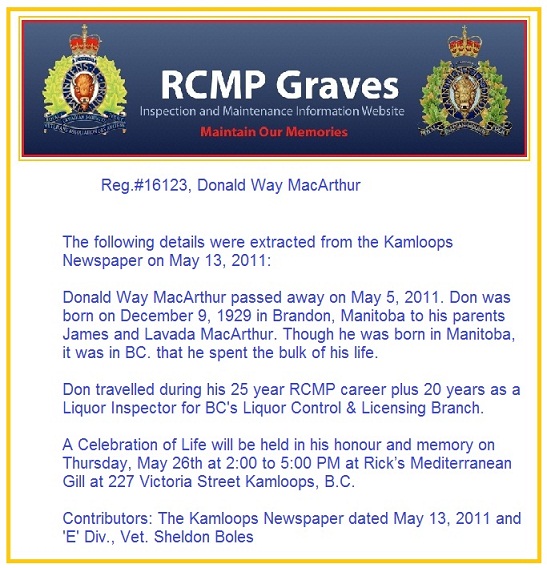 Posted by BuffaloJoe at 11:36 AM No comments:

Links to this post
Labels: Donald Way MacArthur, In memory of Reg.#16123 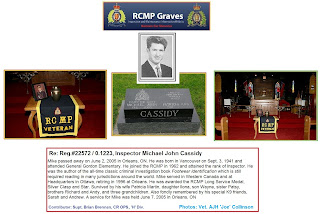 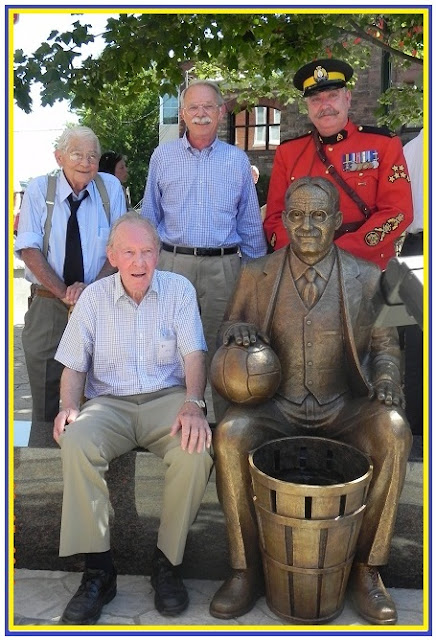 Photo below:
Allen Rae, President of the Naismith Foundation and S/S/M John A. Buis., Burnaby Detachment 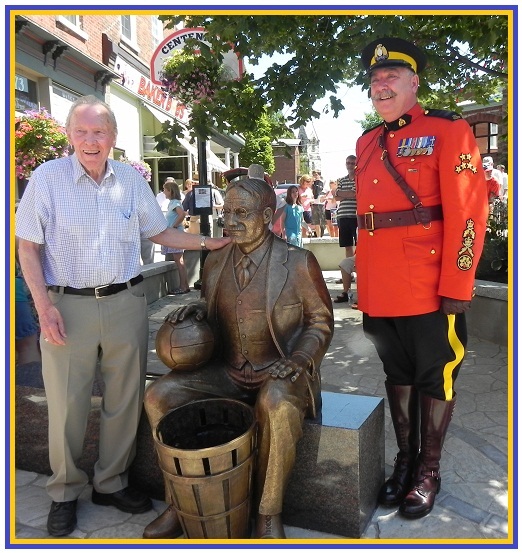 Something's 'Up In The Air' in Almonte, Ontario

One might say that S/S/M John Buis of Burnaby Detachment is 'in the heart of it'. S/S/M Buis is the volunteer Tournament Coordinator of BC's AAA boys' basketball high-school provincial championships, a position which he's held for nearly twenty years.

On March 17, 2005, BC's journalist Jeff Paterson was in conversation with S/S/M Buis and John is quoted here as saying: "...In my role as a police officer, it's great to be involved in a positive event for youth," he says. "I really get lots of satisfaction from it."

Later in the interview, Mr. Jeff Paterson also added: "...As tournament chair, Buis is responsible for making the tournament run as smoothly as possible, which isn't always easy when dealing with 20 teams and hundreds of players. But anyone who's been to the Agrodome on semifinal Friday or championship Saturday knows how the hard work of Buis and his volunteers has given the event a "big time" feel."


Posted by BuffaloJoe at 1:38 PM No comments: