There is one particular reason why life can be sunny and enjoyable. Friends.

Unexpectedly, every once in awhile throughout my career, I would meet a new friend who left me with a memorable, favourable impression. That's the case with Supt. 'Ted' Madill. He was a friend. 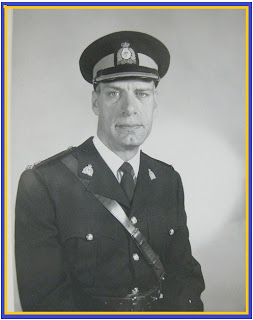 I was a new Corporal in 'Depot'. Supt. Madill was the Admin Officer under Chief Superintendent 'Tad' Tadison. Supt. 'Bill' MacRae was the Training Officer.

One day, I was walking near the Chapel and Supt. Madill was returning to his office after lunch. Salute, naturally. He stopped and spoke to me. Immediately I felt comfortable in his presence. It was about 1973.

Superintendent and a fresh new Corporal. The 'old man' with experience, days gone by, age, wisdom, yarns to tell. Corporal as a listener fascinated by stories he told about my home province of New Brunswick. 'Oh yes, he says, I know all about St. Stephen, NB as I was once posted to 'J'. 'How about those fiddleheads'? 'Aren't they delicious?' Ah, Sir; what's a fiddlehead?'

Supt. Madill was not my buddy. He was a friend. While I was an NCO in other parts of Canada, Supt. Madill remained a friend over the years. He was the kind of Officer that I wanted to be when I grew up. We did not socialize together and I had never visited his home. I recall that his wife was kind. 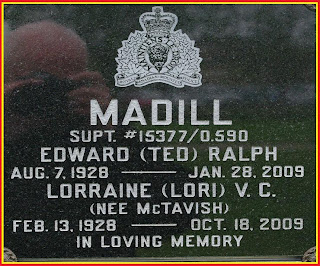 My friend was not threatening yet he was curious in conversation. Perhaps, maybe, he was reminded of being a Corporal years ago? Time passes. Everyone has memories which flash into our minds when a catalyst ignites them. I was a Corporal. Perhaps, as a Corporal I was the catalyst.

And, there was another thing that made Supt, Madill special. He didn't demand respect. He was tall and the quiet type, observing, noting, watching.
He was approachable. His personality made him respected by the junior ranks.

On one occasion, I received a sarcastic memo from an NCO in the Admin Office. I had goofed up with the submission of a form related to a university course. The memo came to me directly from the NCO. Supt. Madill had not seen a copy of it until many hours later. He called me to apologize for the ill tone of the memo. That's the way he was. A friend. Later, I spotted the NCO in the stables.

I'm not sure where my friend went after his death? But, I have a very solid hunch. If I'm right I'll be seeing Supt. Madill again.

But, only if I'm lucky too.