Cst. Bryden served in the Canadian Forces then he joined the Force as a S/Cst. He was promoted to Regular Member and served from 1990 to 1999 in 'HQ' & 'O' Divs.
Posted by BuffaloJoe at 8:33 PM No comments:

I took some time today and searched out some of the deseased RCMP members locations in Vancouver and found that many are located in the same cemetery. I have a list now of names and plots etc. and expect that I may get out that way in the next couple of weeks.

Many of the names may require some research at the history library for thier resting place, that I will have to do at another time as the library is in Cloverdale. I will need to go to the library in Cloverdale later in the fall as I do my genealogy research there and a few extra lookups for you is no problem.

I got curious about Commissioner Lawrence William Herchmer and found him to be a bigger than life character. I have read dozens of items about him in the Manitoba papers. He once was charged with assulting an attorney and on more than one occassion was involved with liquor! At least two of his brothers and one of his children were also policemen and his brother William MacAuley Herchmer was Assistant Commissioner for a while.

He sure is an easy person to trace, always in the public eye and in the news etc.

Thank you for all your good work! I saw the article about you in the RCMP's Frontline Perspective today.

I don't know if you're including ex-members in your website/lists, but my father Peter Couves (Reg. #21417) was a member from 1960-1967. He left the Force to pursue interests in the private sector; in his later years, he told me that if he had it to do all over again, he never would have left the Force.

He hailed from Alberta originally, but was posted to 'O' Division when he finished training in 'N' Division. He worked in Trenton and Toronto in various sections. And in 1995, he presented me with my badge.

Dad passed away September 21, 1999, after a long-suffered disease. He is buried in Pembroke, ON, with a non-RCMP marked grave.

Please advise if you would like to include him on your site, and I will forward you all the information. He worked in the days before email and internet, and I'm quite certain some of his troopmates will be interested to track him down, regardless of the circumstances.

I actually ran across one of his troopmates by accident while conducting an investigation a few years ago, so it has been very neat to have that link to that time in my dad's life.

Posted by BuffaloJoe at 8:41 AM No comments:

'Maintain Our Memories
Posted by BuffaloJoe at 8:30 AM No comments:

I'm glad that you liked those pics of Sergeant Major Bray. My friends Len and Deb were real happy to go get them for your website.

I always found his gravesite to be one of interest to me as I found it when I was pretty young kid. If I ever make my way back to Medicine Hat, I will be taking my camera as I know there are several more members old graves listed and I'm sure you do not have photos yet. Its a matter of being able to find them again in the older sections of the "new cemetery" in the 'Hat'.

Thanks again for putting together such a great website....it really is awesome.
If there is anything I can do to help, please feel free to ask.

I am a member posted in Nelson, BC.

My neighbour expressed an interest in chaplaincy work with the RCMP. He works for the ambulance in addition to his duties as a minister at our local church.

The nearest chaplain to Fruitvale, BC appears to be Cranbrook, which is some distance away. Could you give me a contact to call about the Chaplain's Program?

He speaks English, French and Spanish which might be assets to the Force.

I once lived in the village of Perkins, now Val-des-Monts, Québec. There is a cemetery beside the Church just off the road that leads into Perkins.  I recall a grave with the RCMP crest but I can't remember the name on it. The grave is easy to see from the parking lot -- close to the street.

If you wish, you can reach me on my cell and I can drive up and have a look at the grave and get the information.  Don't hesitate to contact me...it will be a pleasure to help.

If it's not too much trouble, I am seeking the obituaries on the
following members: 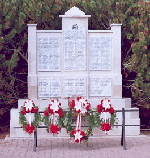 Hilton Bacon was an old family friend and I remember him as a child in his uniform coming by for a visit. He always attended my parents parties and I've always wondered what ever happened to him.  He was such a kind man.

Leonard Fielder is the father of my cousin's wife.

Linda
Friend of the Force
Lower Mainland, BC


My father rests in Springhill Cemetery - 3071 Yorks Corners Road / Hwy 31 Metcalfe, ON.  He is buried under one of the maple trees which he planted as a young school boy.


You do a great job! Back in the late eighties I worked as a prison guard at the Carmanville Detacment, NFLD and I got to know a lot of members there.

My dad also once knew a member by the name of 'Steve Mingle' and I'm just wondering why is name is not on the NFLD list as he was killed in car crash here many years back?

Does anyone recognize Mingle's name?

I always wondered how well Charlie's headstone kept over the years. Thanks to your site I've been able to find out that it's looking better than ever.

I looked after his headstone with pride from 1987 to 1990 as I was posted to Kirkland Lake Detachment. I'm sorry that I missed the unveiling of his new headstone. I hope to head back that way one day and pay my respect to an old friend one more time.

The purpose of this new blog is to support the existing website titled: 'RCMP Graves Location and Maintenance Program'.

Ideas and comments are welcome.