In Memory of RCMP Members Killed at Carmacks, Yukon 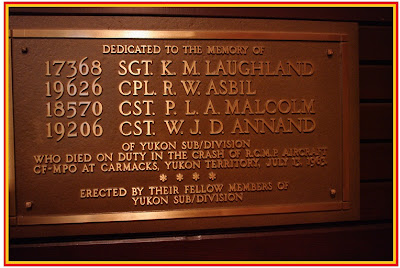 The following is an excerpt from the Whitehorse Star which summarizes the tragedy of our members.

"Plane Burst into Flames When It Struck the Ground

Four Whitehorse RCMP officers and a prisoner were killed Saturday evening when a Beaver aircraft crashed and burned in Carmacks.

Desormeaux was a time-serving prisoner who had appeared as a witness in a contested court case at Mayo and was being returned to Whitehorse when the crash occurred.

The Whitehorse Air detachment RCMP aircraft CF MPO was apparently landing in Carmacks on police business. It crashed in a bank just below the Mayo Road at a location approximately in between the Territorial Garage and the Carmacks bridge.

Police said the crash happened about 8:10 p.m. No cause for the accident has been established but a Department Transportation investigating team has been flown in from Edmonton to search the wreckage.

Word of the mishap shook the Yukon because the men were well-known to many residents. The Whitehorse Star joins those grieving today as a consequence of the tragic death of the men..."

Photo of Memorial taken from the RCMP Chapel, Regina, SK.

Labels: In Memory of RCMP Members Killed at Carmacks, Yukon (1963)