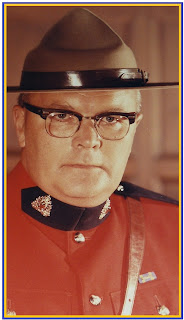 A note of remembrance was received from S/Sgt. Ed Bennett's son, Derek Bennett.

He went through initial training and resumed his post as the RCMP Constable in Botwood, NL rising through the ranks as Constable in charge of Botwood Detachment.

Dad was later transferred to 'K' Division where he remained until his death in 1972.

*Our thanks go to Dereck Bennett for this note about his Dad and for the photo.