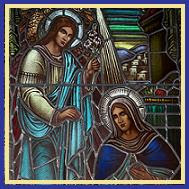 My family has some RCMP winter service mittens that were owned by Cst. D McBeth. We understand that he drowned in Saskatchewan in the 30's. Family lore had it that he was accompaning the march of the unemployed from Vancouver down east. We think he was otherwise stationed in the 'north'.

I would like to donate the mittens to the museum in Fort Macleod, but I would like to be more sure of my facts before I approach them. Can you give me any help? 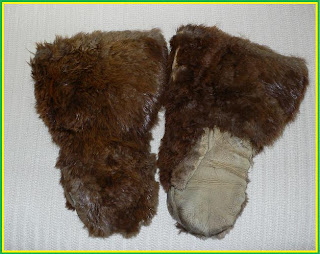 Thank you for your note.

I went to Veteran Jack White's History files to determine the way in which Reg.#11116 Donald McBeth died: Vet. White states: "On August 4th, 1935, off duty Reg.#11116 McBeth canoeing with Reg.#11195 Mast at Regina Beach when sudden wind storm upset canoe. Members swimming toward shore and propelling canoe, when McBeth suddenly sank. Despite efforts of Reg.#11195 & other swimmers, his body was not found until 12 hours later.

If I can help you further, please let me know. Prompted by your e-mail, I have updated Cst. McBeth's database file.

I would be deeply appreciative if you would send me a snapshot of the RCMP mittens so that I can add the photo to Cst. McBeth's file

I became aware of your website from a recent article in the Front Line Perspective publication.

I served in 'F' Div. and I was stationed in Onion Lake from 1988 to 1991. During that time, I was responsible for the Annual Grave Inspection and Report.  I was pleased to see that the three members buried in Onion Lake (Hall, Burke and Lucey) were included in your data base.

I am surprised, however, that S/Sgt Hall's grave in unmarked. I recall on my first inspection that his headstone had been damaged and my report recommended that it should be replaced. I thought a new one had been ordered and installed prior to my departure in 1991?  S/Sgt. Hall's grave was in the same cemetary but was not adjacent to the other two members whom I've mentioned.

S/Sgt. Hall had an interesting and unusual career. He had to patrol the entire north west area of Saskatchewan by horse and he would leave the Detachment on extended patrol for months. He was also the first member at the Frog Lake Massacre. I once had the opportunity to meet his daughter -- she had in her possession several articles of the NWMP (ie: his issue lamp, some uniforms etc.) plus his diary describing the massacre scene as he saw it in Frog Lake.

I was able to learn from Jack White's history files that S/Sgt. Hall was born on June 8, 1859 in Brookeboro, Ireland and he spent three years in the North Irish Horse Regiment. After arriving in Canada, he joined the NWMP on April 17, 1882.

Jack White tells this story of S/Sgt. Hall. About 1901, an Indian named  'Mighty Hamlin' stabbed several people then fled to a dugout fort with a rifle. S/Sgt. Hall was alone so he rode for three days (120 miles to Battleford) to report the incident and get help. Afterwards, he returned to Onion Lake with Reg.#3571 McArthuer and Reg.#3261 Kennedy. Using a ruse of being drunk natives, they lured 'Mighty Hamlin' out of the fortress. 'Mighty Hamlin' was wounded but nevertheless place under arrest!

On another sad note, over a period of a month, S/Sgt. Hall was also responsible for retrieving many of the the remains of murdered victims of the Frog Lake Massacre and placing them in a temporary cemetery.

S/Sgt. Hall retired as the NCO i/c of Onion Lake Detachment on April 16, 1910. After he retired, he was granted a pension of $104.00 quarterly. For a while he farmed then he became the Post Master in Onion Lake. The job went to his wife after he died on February 14, 1926.

I would imagine that the difficulties and hardships which he encountered over his career probably never left his mind. Considering S/Sgt. Hall's contribution to the NWMP like so many others, I assume that members today are still doing grave inspections to ensure that the graves reflect the Force's respect for our deceased members.

I think S/Sgt. Hall truly deserves to be nominated as May's Vet of the Month!

In closing, I would like to congratulate you on a job well done!

'Maintain Our Memories'
Posted by BuffaloJoe at 8:48 PM No comments: 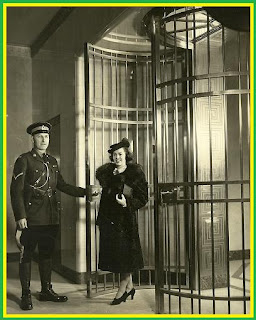 
'Maintain Our Memories'
Posted by BuffaloJoe at 5:51 AM 1 comment:

NOAKES, Nancy Louisa (nee Meyer) - It is with great sadness that we announce the unexpected passing of Nancy Louisa Meyer Noakes on Tuesday, May 25, 2010, as the result of an accident. Devoted mother of Sara, Andrew and step-son Bobby, wife of Robert Noakes. Loving daughter of John and Lia Meyer of Milton. Cherished sister of Alice (Derek) Ramalho of Brampton and Linda Meyer of Calgary, AB.

Nancy will be sadly missed by her dog Penny. Nancy retired as on Officer from the RCMP after 16 years of service to dedicate her time to family. She worked over a decade with the Milton Public Library, were she will be deeply missed by her co-workers.

In more recent years, Nancy began taking flying lessons which quickly became a great passion. Family and friends are invited to visit at the McKersie - Kocher Funeral Home, 114 Main St., Milton, 905-878-4452, from 2-4 p.m. on Tuesday, June 1, 2010. The Memorial service will follow Tuesday evening at 7:00 p.m. in the funeral home chapel. In lieu of flowers, memorial donations to the Canadian Cancer Society (Breast Cancer Research) would be appreciated. 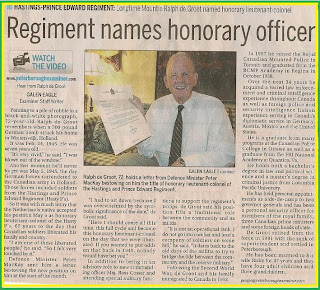 Supt. de Groot joined the Force in 1957 and he retired in 1991. Ralph and his wife live in Peterborough, ON
'Maintain Our Memories'
Photo credit: Peterborough Examiner
Posted by BuffaloJoe at 5:58 AM 1 comment:

'Maintain Our Memories'
Posted by BuffaloJoe at 5:32 AM No comments:

My grandfather, Reg.#5482, Frank Crossley
A few years ago I visited my grandfather's grave site in Royal Oaks Cemetery in Victoria, BC. At that time I noted that there is nothing denoting the fact that he was one of the first RCMP members of Canada. My siblings and myself would very much like to see some sort of RCMP marking on his grave, as I think he was proud of his life's work.
I know that my grandfather first served with the RNWMP from about 1910 and when it changed to the RCMP he continued to work till 1920. He also served in WWI in France as a private with the Lord Strathcona Horse Regiment. He was in the last battle fought on horseback!

'Maintain Our Memories'
Posted by BuffaloJoe at 9:07 AM No comments:

'Maintain Our Memories'
Posted by BuffaloJoe at 9:27 PM No comments:

'Maintain Our Memories'
Posted by BuffaloJoe at 5:49 PM No comments:

I am advised that;

D/Comm'r Martin served from 1969 in 'A' Div. and then in the Canadian Police Information Centre 'HQ' (CPIC). Over the next 32 years he was in Informatics in 'O' and 'B' Div. and in the Pacific Region.

In 1998, he retired to take on the role of General Manager of the Emergency Communications for Southwestern British Columbia (E-com) project. In 2001, Peter returned to the RCMP as the Director of Informatics and then as the Chief Information Officer.

'Maintain Our Memories'
Posted by BuffaloJoe at 4:23 PM No comments: